We celebrated our Centennial on the St. Cloud State University campus where our branch began by taking 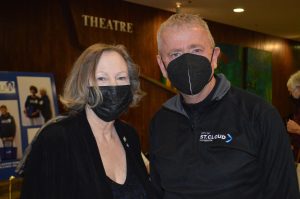 a music-and-memories stroll through the decades since our founding in 1922.

Costumed characters recounted our branch’s achievements, high points, and our community contributions as well as  its evolution into the vital organization it is today.

We remembered past members and welcomed new. And, an opened time capsule revealed a collection of memorabilia that had been put aside when the group marked a previous anniversary.